A newly framed artwork of a group of protesting women, crafted on a ream of A4 printed court documents, depicts the struggles of many to ensure the socio-economic rights of all South Africans. It also celebrates the career of Stellenbosch University (SU) distinguished professor Sandra Liebenberg as a human rights lawyer, A-rated human rights law researcher and academic supervisor to a younger generation of jurists.

The artwork hangs in the entrance to her office in the JC Marais Building. It was done by way of thanks by one of her recent LLM degree graduate students, Gideon Basson.

It’s very symbolic of the work Prof Liebenberg has done over decades, and which was recognised earlier this year with an A1 rating by the National Research Foundation.

It is sketched on printouts of the amicus curiae (friend of the court) brief that she helped draft in the Grootboom case – the landmark judgment of the Constitutional Court on the right to housing for people evicted from their homes and facing homelessness.

“A sense of justice has been a theme for me since I was a school child,” explains Liebenberg, who grew up in Mpumalanga and KwaZulu-Natal. “I didn’t always pursue it in very sophisticated ways when I was younger, but justice, particularly for those oppressed by apartheid laws and social policies, has always motivated me.”

She has played more than her part in securing human rights in South Africa. In the mid-1990s the ANC nominated her to serve on the Technical Committee advising the Constitutional Assembly on the Bill of Rights in the 1996 Constitution. She subsequently chaired the Committee, and took responsibility for researching and drafting the provisions in the Bill of Rights dealing with socio-economic and cultural rights.

In the early 2000s she helped with the amicus curiae submissions to the Constitutional Court in the Treatment Action Campaign’s (TAC) seminal case to ensure antiretroviral treatment to prevent mother-to-child transmission of HIV/AIDS.

During those years, she worked at the University of the Western Cape’s Community Law Centre (now Dullah Omar Institute). After joining the Centre in 1994, she founded the Women and Human Rights Project and the Socio-Economic Rights Project. She researched the kinds of laws and policies needed to implement socio-economic rights (such as the new child support grant, water and housing legislation), community education and supporting litigation. She also taught postgraduate modules on socio-economic rights, and edited books such as The Constitution of South Africa from a Gender Perspective, and Socio-Economic Rights in South Africa: A Resource Book.

In 2004 she joined the SU Faculty of Law, as the HF Oppenheimer Chair in Human Rights Law. She has since assisted with amicus curiae interventions in the Constitutional Court, such as the Olivia Road case involving people evicted from so-called “bad” buildings in Johannesburg’s inner city.

She also organised a major international conference on Law and Poverty, and co-edited a book on the same topic.

Since 2004, she has co-organised the flagship International Course on the Justiciability of Economic, Social and Cultural Rights with the Åbo Akademi Institute for Human Rights (Finland) and the Norwegian Centre for Human Rights. It is part of the Global School on Socio-Economic Rights, a partnership of ten university law faculties worldwide.

Prof Liebenberg serves on the editorial boards of leading constitutional law and human rights law journals in South Africa and elsewhere. She was a visiting scholar to Nottingham University and Cornell University, and was recently appointed as Extraordinary Professor at the Centre for Human Rights of the University of the Free State.

“I’ve followed the body my whole career. It’s been such an inspiration. To be part of it and to be making the law on it was a huge honour.”

It’s quite literally to the future that she nowadays looks.

Liebenberg leads the drafting committee of the international Maastricht IV Project on the Human Rights of Future Generations. It is developing international legal principles and guidelines on how to protect the human rights of future generations in light of existential threats such as climate change, environmental degradation, loss of indigenous peoples’ cultures and livelihoods, growing inequalities, new technologies and weapons of mass destruction.

The project is coordinated by Maastricht University’s Centre for Human Rights and the international NGO, the Food International Action Network (FIAN).

“Human rights law often only focuses on the present. We increasingly need to think of the condition that we leave the planet in, and what our children and grandchildren will inherit. Current trends are potentially catastrophic for their futures.”

“I am very keen to approach this research from a particularly African focus given, that Africa still bears a heavy burden due to the legacies of colonialism and unequal global patterns of development. These past injustices not only influence the present, but also the future of many generations of Africans.

While Prof Liebenberg studied BA Law and LLB at the University of Cape Town in the mid-1980s, she provided legal advice to community and trade union advice centres. She organised a 1986 student conference on law in a state of emergency, and as member of the National Catholic Federation of Students, participated in conferences in townships.

“Those conferences were formative. I saw first-hand the conditions under which people lived and their struggle for liberation and a decent quality of life,” remembers Liebenberg, who was once detained for two weeks after student protests.

After her articles of clerkship she worked for two years in Cape Town as a public interest lawyer, representing communities and trade unions impacted by apartheid laws.

Thanks to a Helen Suzman Leadership Award provided by the British Council, she could study International Human Rights Law at the University of Essex.

A LLD degree from the University of the Witwatersrand followed in 2011. The seminal book, Socio-Economic Rights: Adjudication under a Transformative Constitution flowed from it.

At SU, she primarily teaches undergraduates on constitutional law issues with a focus on human rights law, and also supervises postgraduate students. The former student activist says that her postgraduate students bring her “immense joy”. They research topics such as poverty as a prohibited ground for discrimination in South Africa; the right to health for survivors of gender-based violence, and of community-based mental health care; linkages between environmental and socio-economic rights; and how company law can protect human rights better. “My students’ work and commitment to justice and their studies inspires me and gives me the energy to keep pushing forward with my research and advocacy.”

Inspiration
Liebenberg remembers how, during her early years at SU, she was struck by the late Prof André van der Walt’s commitment towards his students.

“They are the future, the ones who are going to take one’s ideals and research into the future. It’s important to invest in them.”

It’s however from her husband, Jan Theron, that she draws most strength and inspiration. Theron, himself a lawyer, was general secretary of the influential Food and Canning Worker’s Union in apartheid times.

“I’m grateful for a partnership with someone who shares my political outlooks and beliefs. He gives me the confidence to stand up for my principles and continue to support the disadvantaged and marginalised.”

“When I started researching socio-economic rights, this field was not accepted or taken seriously in the mainstream, conservative legal culture in South Africa. It was a big struggle to get these rights recognised in the Constitution. Great strides have been made in recognising socio-economic rights as fundamental human rights, both in South Africa and internationally.”

She sees her A-rating, recognising her as a world leader in this field, as an indication that it is now a legitimate field of legal research that “has come of age.”

“A whole new generation of scholars are expanding the field in in innovative and exciting directions. I am very grateful to have played a part establishing this field and in demonstrating its potential to support struggles for a more just society.” 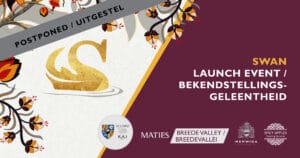 #SWAN: Breede River event postponed until February 2021 due to Covid-19