The Development and Alumni Relations Division’s Always a Matie series of short films as well as its newly launched video series, Matie pioneers and legends, will soon be on a TV screen near you!

These short films will be screened on DStv channel 150 in South Africa, and on GOtv channel 15 in Namibia as part of the 2021 Toyota SU Woordfees which will air from 1 to 7 October. DStv Fees TV, as it will be known on DStv, is the first ever arts festival on South African television.

The short films in the Always a Matie series specifically look at six areas, namely bursaries, disability, sport, innovation, student leadership, and the arts, and give alumni and current students the opportunity to share what impact the University has had on their lives.

Prof Wim de Villiers, current Rector and Vice-Chancellor of SU, and Wandile and Wanele Ganya, two graduates of the SU Faculty of Medicine and Health Sciences (2015) answer our big question: “What does being a Matie mean to you?”

World champion athlete Ilse Hayes and PhD student Rynhard Kruger, the first blind person at SU to do a Master’s degree in Computer Science, show us how to turn obstacles into opportunities, while Prof Yusef Waghid, distinguished professor at the Faculty of Education and Matie student Ruan Steyn illustrate the transformative power of education and opportunity.

We also get a personal glimpse into the life of visionary leader Frederik Van Zyl Slabbert, through the eyes of his daughter, Tania Slabbert.

The award-winning Stellenbosch University choir, currently rated as the best amateur choir in the world by the Interkultur Foundation world ranking system since October 2012, makes a special appearance and captivates with their moving harmonies and musical excellence.

In the first instalment of Matie Legends and Pioneers, Morné du Plessis, former Maties and Springbok captain and manager of the triumphant 1995 World Cup team, talks about Doc Craven, the Test series against the British and Irish Lions in 1974 and 1980, as well as the Test series victory over the All Blacks in 1976.

Do not miss out.

Fees TV will be broadcast 24 hours a day to all premium and compact plus subscribers in South Africa and Namibia.  The programme content displays a broad range of genres: theatre, writers and books, dance, lifestyle, stand-up comedy, contemporary and classical music, film, discourse, and visual arts.

Fees TV will broadcast predominantly in Afrikaans but will also include English and multi-lingual works. All Afrikaans narrative works produced by the Woordfees festival, such as plays and discussions will have English subtitles. 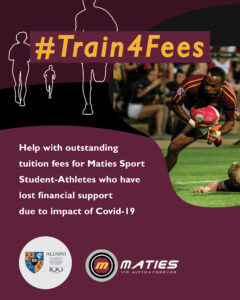