An arguably under-reported feature of the visit of US Senator Robert F. Kennedy to South Africa in June 1966 during the height of Apartheid is his visit to Simonsberg residence. Even as he toured South Africa, the young presidential hopeful was honing his campaign to reach the White House in the 1968 US elections, and his appearance at another ‘White House’– this one in Stellenbosch – was met with thunderous applause.

The story of Simonsberg can never be told without sharing this story, the story of Bobby Kennedy, and his indelible legacy. His visit to the ‘Withuis’ on 7 June 1966 remains one of the most important events in the history of this residence, and to this day is a source of pride for many Simonsbergers.

In the second episode of our alumni series MATIE LEGENDS AND PIONEERS, journalist and producer Bun Booyens shares this story, in conversation with Jan Louw, residence head Dr Leslie van Rooi, and the students of the residence.

This episode is enriched by never-before-seen archive footage and interviews from filmmakers Larry Shore and Tami Gold, who produced the 2009 documentary RFK In the Land of Apartheid: A Ripple of Hope, which is now streaming on Amazon Prime.

This footage includes extensive interviews with the 1966 Primarius of Simonsberg, the late Willem van Drimmelen. Substantial credit was given to Van Drimmelen, who facilitated the visit and corresponded with Kennedy in the preceding weeks. It is wonderful to watch Willem in our video, directed by Jo Higgs, sharing his memories in his distinct baritone voice.

Tragically, Robert F. Kennedy was assassinated on 6 June 1968, some two years to the day of his visit to Simonsberg. Although this Kennedy never made it to the White House in the US, his visit to our ‘Withuis’ and to South Africa had a significant impact in planting the seeds for the changes that would come to fruition many years later.

Thirty years after Bobby Kennedy’s visit to South Africa, his wife Ethel and other members of the family returned for another visit, and thereby hangs a tale, as told in our video by Norman Cilliers (Primarius in 1995/96 and the nephew of Willem van Drimmelen).

We hope that you will enjoy watching this episode, ‘Robert F. Kennedy and the Other White House’, when you join us for the online screening on Tuesday, 17 May, at 18:30 SAST.

We will be gathering in the dining hall of Simonsberg on the evening, for those of you who are able to attend in person.

You are welcome to view the first episode of our MATIE LEGENDS AND PIONEERS series, which is the interview with Morné du Plessis, here.
To manage your contact and subscription information click here. 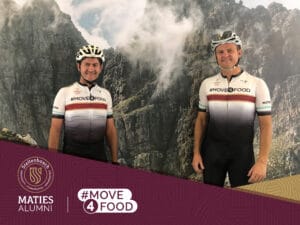 Multiple votes of confidence in SU

Help us to ‘Bridge the Gap’