Alumna Lauren Tsafandakis was recently announced the winner of the prestigious CGW Schumann Medal for the best postgraduate student in 2021 in the Faculty of Economic and Management Sciences at Stellenbosch University. A formal handover ceremony is scheduled for later this year.

The medal, named after Prof CGW Schumann, a pioneer lecturer in the Faculty from 1924 and also dean for a quarter of a century from 1935, has been awarded annually since 1986. The award is the highest student accolade in the Faculty.

Tsafandakis, who is currently doing her articles at PricewaterhouseCoopers, completed her undergraduate degree (BAcc) with a weighted average of 92.7% in 2020, and BAccHons with an average of 87.1% in 2021.

“It is an honour to receive recognition from Stellenbosch University, and a great validation to my hard work over the years,” an elated Tsafandakis said.

The Pretoria native, who draws inspiration from creative people such as musicians and artists who are passionate about what they do, also had high praise for the academics at SU.

“The lecturers at Stellenbosch truly are phenomenal, they are always willing to engage in thoughtful questions, and I think that helped me grow tremendously.”

Tsafandakis, who attended St Mary’s Waverley High School in Johannesburg, also gave credit to her family, friends and school for their part in shaping her into the person she is today.

“My family allowed me to prioritise my academics by consistently creating a very supportive environment in which I could work. The friends I have made helped me to feel confident in myself and to always put my best foot forward. The challenges I faced in high school made me into a more robust person, and the academic excellence pursued by the school created an ideal environment in which I could work.”

The Schumann Medal is the latest in a host of accolades the mercurial Tsafandakis had received for her academic efforts. Most recently, she was placed first in the SAICA (South African Institute of Chartered Accountants) Initial Test of Competence (ITC) exams. The ITC is the first of two exams conducted by SAICA that individuals who want to qualify as chartered accountants in South Africa have to pass. In 2021, Tsafandakis was also honoured with the Rector’s Award for Excellence in Academics. In addition, Tsafandakis was the top student in her second and third year, received a first-year achievement award and was also the top micro- and macro-economics student in her first year.

But, in typical fashion, the humble Tsafandakis is quick to downplay the “gifted” tag.

“I do seem to have a knack for academics, but I also worked incredibly hard over the course of my studies. I would like to think that it is a mixture of the two.”

However, she lights up when she delves into her favourite pastimes.

​“I enjoy creating art, spending time with friends and family, pets, traveling, taking pictures, watching anime and listening to music. I love traveling. I always find there are such wondrous things to see around the world. I have been privileged enough to have travelled to destinations in both the US and Europe, and more recently Japan. I would love to visit Amsterdam in the future,” she said.

Dean of the Faculty Economic and Management Sciences Prof Ingrid Woolard hailed Tsafandakis as a worthy winner with an extraordinary academic record.

“You are a great inspiration to us and to your fellow students. We are very proud to be able to claim you as a Matie, and we look forward to following your future studies and career with great interest!” said Woolard. 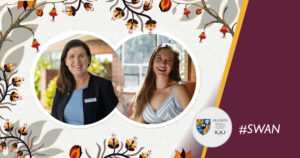 #WomeninBusiness: Why Women’s Day may be of little value